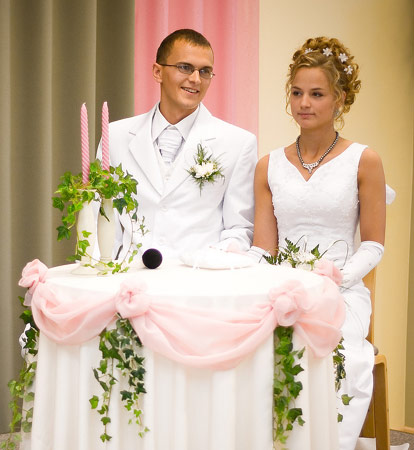 Parents are rarely involved in choosing a child’s spouse, though they often participate in organizing the wedding celebration.

People in Estonia do not tend to marry early. The typical age for marriage is between 25 and 30 years, though people can legally marry when they are as young as 18. The role of religion in an Estonian marriage depends on the beliefs of the couple, but is often minimal. Cohabitation is common and accepted in Estonia, often but not always as a precursor to marriage. Parents are rarely involved in choosing a child’s spouse, though they often participate in organizing the wedding celebration.

Long ago, Estonian girls celebrated their passage from childhood to womanhood with weddings. Marriage was the principle means of fulfilling social and biological responsibilities. After World War II, marriage rates were high and many people chose to have families early. Since then, the percentage of married couples has declined.

Estonian weddings are colorful and famous for their festivities. Traditional weddings usually had two parts, one at the bride's home and the other at the groom's. Weddings were commonly held in autumn or early winter when food was relatively plentiful and farm chores were fewer.

It was important that both the proposal and the wedding took place under a new moon, which was considered lucky. The church ceremony was always less important than the traditional rituals, which included bathing and dressing the bride, transferring the dowry, dancing, exchanging gifts, and feasting.

Today, a civil wedding is necessary for a marriage to be legal. The couple may have a church wedding afterward if they wish, but it is not necessary. In either case, a wedding is usually followed by a party, which may still last for two or three days and include some traditional rituals.

Legally, men and women have equal rights in marriage, and for the most part married people are equal partners when it comes to earning and making decisions that affect the family. However, it is still common for Estonian women to be responsible for most or all of the housework.

After marriage, young couples generally live in their own apartment or home, though they may occasionally live with their parents if they need time to become financially established.

Extramarital affairs are not condoned and often lead to divorce, but they no longer carry much stigma. Divorce is common in Estonia, and about half of marriages end in divorce. In general, divorces are relatively simple to obtain. Both husband and wife have equal rights to marital property and child custody, and women are generally treated fairly by the courts. Widows and divorcees can remarry at will.